The Iberdrola group is planning to build a large green hydrogen plant at the port of Felixtowe (England) which, with an investment of some €170 million (£150 million), will contribute to the decarbonisation of the largest freight port in the United Kingdom.

The facility, which will be operational in 2026, will, in a first phase, have the capacity to produce 14,000 tonnes per year of renewable H2, which can be doubled in the future. The plant will supply hydrogen to vehicles and machinery used by the port and will be capable of fuelling up to 1,300 green hydrogen trucks. It will also be used to provide clean fuel for trains transporting goods to the port.

It will also have the potential to be used for the production of green ammonia or ethanol, which could provide clean fuels for shipping and create opportunities for export to other international markets.

The project – to be developed by ScottishPower, the group’s UK subsidiary, together with Hutchison Ports – is expected to be located on brownfield land within the port, similar in size to a football pitch.

The green hydrogen will be produced through an electrolyser that splits water into hydrogen and oxygen using electricity from renewable sources. The port of Felixtowe is located in the vicinity of the offshore wind farms that Iberdrola is developing in British North Sea waters. The company has already commissioned the 714 megawatt (MW) East Anglia ONE in this area and plans to build the East Anglia Hub offshore wind macro-complex, which will bring together three projects with a total installed capacity of 2,900 MW: East Anglia ONE North, East Anglia TWO and East Anglia THREE.

The Iberdrola group is currently promoting the main green hydrogen projects in the United Kingdom, to which the plant at the port of Felixtowe has now been added.

In partnership with Storegga, the company will develop a project in Comarty, north of Inverness, which will enable the decarbonisation of distillery heating processes. In the first phase, which will come on stream from 2024, it will produce up to 4,000 tonnes per year, with the potential to expand to a total of 20,000 tonnes in the future.

In addition, Iberdrola will install a green hydrogen plant at its Whitelee wind farm outside Glasgow, capable of generating 3,000 tonnes of H2 per year, which will come on stream in 2023 and will be able to supply enough emission-free hydrogen to power up to 550 buses a day to and from Glasgow and Edinburgh. The project is supported by the UK government, which has committed more than €11 million (£9.4 million) from the Department for Business, Energy and Industrial Strategy’s (BEIS) energy innovation portfolio to its construction.

In its commitment to driving the energy transition, the Iberdrola group is leading the development of green hydrogen with more than 60 projects in eight countries (Spain, United Kingdom, Brazil, United States, among others) to respond to the needs of decarbonisation.

As it did with renewables 20 years ago, the company has once again pioneered the new technological challenge of producing and supplying green hydrogen. Iberdrola is thus at the forefront of this new renewable revolution, helping the hard-to-electrify industry to reduce its polluting emissions.

The group currently has a portfolio of green hydrogen projects that will require investments of 9 billion euros by 2030, with the objective of developing 400,000 tonnes/year of green hydrogen.

Among the projects promoted by the company, of note is the installation in Puertollano (Ciudad Real) of the largest green hydrogen plant for industrial use in Europe, capable of producing 3,000 tonnes of emission-free H2 per year, thanks to the use of renewable sources. 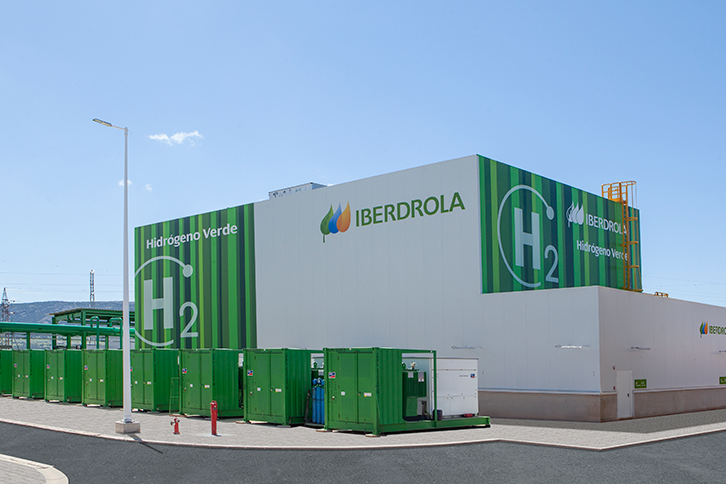